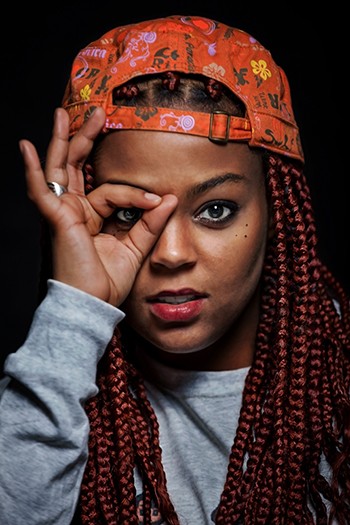 Floami Fly creates music that moves, with articulate lyrics meant to challenge and widen perspectives, while also airing out her own unique narrative. Floami is a Chattanooga- based musician who gigs on a regular basis in and out of town. Her latest release, Asylum, is available on Soundcloud and Spotify.


When did your relationship with music start?

FF: My relationship with music started pretty early on. I have a song called Eyes on Clive describing the first time I heard Whitney Houston sing, but I was more captivated by Clive Davis. I was 5. That was a moment of awareness that really shaped the direction of my interests and began to cultivate a fascination with the beauty, the power, and the glamor that musicianship and entertainment entailed.

I grew up with music in the house all the time. My father sang and played the trumpet, and toured in his teen years in the U.S. and Mexico. He showed me all kinds of music, predominately Funk, Soul, and Opera. My great-grandmother's brothers had a pretty well known quartet in Knoxville. I recently found out one of my cousins is a classically trained jazz pianist who graduated from Juilliard. Its crazy how deep it goes.

Do you listen to albums at a time or single tracks?

FF: It depends on the artist and my mood. I used to listen to albums at a time, but now with the way streaming platforms are set up, the ability to mix and match and create playlists has really changed the listening experience. I think iTunes and Spotify have ushered in the era of a singles driven music market. I recently listened to J. Cole's K.O.D. all the way through though, but I still took my time with it.

What music and literature are you drawn to? Lately / in general – genres or artists/writers

FF: I'm into all kinds of weirdo crap. But I also like super mainstream stuff. A lot of people are surprised I listen to as much trap music as I do. As far as literature goes, same thing. I'm more into reading scientific journals like Psychology Today, Scientific American, and Wired. I also use this app called Medium that customizes articles I'm interested in.

How do you describe yourself as an artist? Genre, medium, and then some.

FF: Hip Hop, Funk, and Soul for sure. Aside from that whatever happens next happens. I fight with myself a lot because I don’t want to only be "lyrical". The second you are labeled, there is an expectation, and a limitation, and an element of predictability that takes away from the creative process. I want to create good music. I want to express myself in a way that most accurately captures the chosen topic; whether that requires more or less words speaks to the mood in question.

Do you play instruments?

FF: Yes - violin. I haven’t played in a while though, but I played for 13 years - orchestra, junior clinic, weddings, etc.

Is your best work produced solo? Or do you find that your creativity shows itself through collaboration?

FF: I usually like sorting through beats and writing solo. I get inspired by other artists creativity though and that can change the direction of a verse, but that's usually during the recording phase. 9 times out of 10 I like writing solo. I'm an introvert so I get energized from the solitude. Plus I change things around constantly.

What’s your favorite song of yours? What other songs would it be on a playlist with?

FF: My favorite song on wax is Ghosts. That junk just hits so hard and it has a dope message. It talks about corruption in the music industry, the pressure to compromise originality for conformity, and speaks to the current political climate - specifically substituting political agendas for morality. It needs some mastering, but that would be dope if it was featured on Rap Caviar. Ghosts got picked up by Bass Radio on Spotify so that was a pretty proud moment.

Floami Fly – nickname? Alter ego? Fill me in on your moniker

FF: Floami Fly has multiple meanings. The first is “Flo. Am. I”. I encompass the fluidity of the flow, the rhythm, etc and translate that energy into words. "Ami" as a root word has sanskrit origins that translates into "love" and "respect", and also means "nectar" in Hebrew. The thought was after you hear me flow, hopefully I have engendered love and respect. Fly was something I tacked on in college as like retro hip hop slang, but that has since developed. A fly is an insect that creates sustainability from decay. It is a survivor. Flies are slept on in general. It speaks to black culture and hip hop as whole, as well as my own personal experiences.

What’s the best advice you’ve received about pursuing a career as a musician?

What is your opinion of our local music scene?

FF: I think it’s come a long way. There’s a much wider variety of venues for artists to perform at than ever before. I think there are more online outlets for artists to get exposure and we’re headed in the right direction. There is a lot more unity and consolidation. That being said, the expectation of “free” shows for artists is a persistent problem I, and many of my artist friends, encounter. Artists should definitely be paid for their services, and we have to compensate them in a sustainable fashion. We spend money at the studio, professional photography, music videos, social media promotion; we spend countless hours crafting the song structure, melody, lyrics, etc. Rappers in particular also spend money on purchasing beats. This can get pricey! I have spent over 300 dollars on one song before! I have spent at least 2 grand recording and polishing an album and getting it printed. Most of us are attempting to transition into doing this full time, so we can dedicate more of our creative energy to making killer music. We have to work together.

How can we make Chattanooga a more supportive community for musicians?

FF: We really need points of contact or “plugs” in music hot spots in the city. I would love to see a music networking event that could connect artists with resources - booking agents, A&Rs, managers, employees from publishing companies, etc. I think the biggest issue is the lack of access to the connects that can get local music heard on a larger scale, and serve as a transitional platform for artists to go into doing music full time. We have great resources to help artists develop and record and learn how to use equipment, but we also need help getting leverage once the music is on wax and mastered.