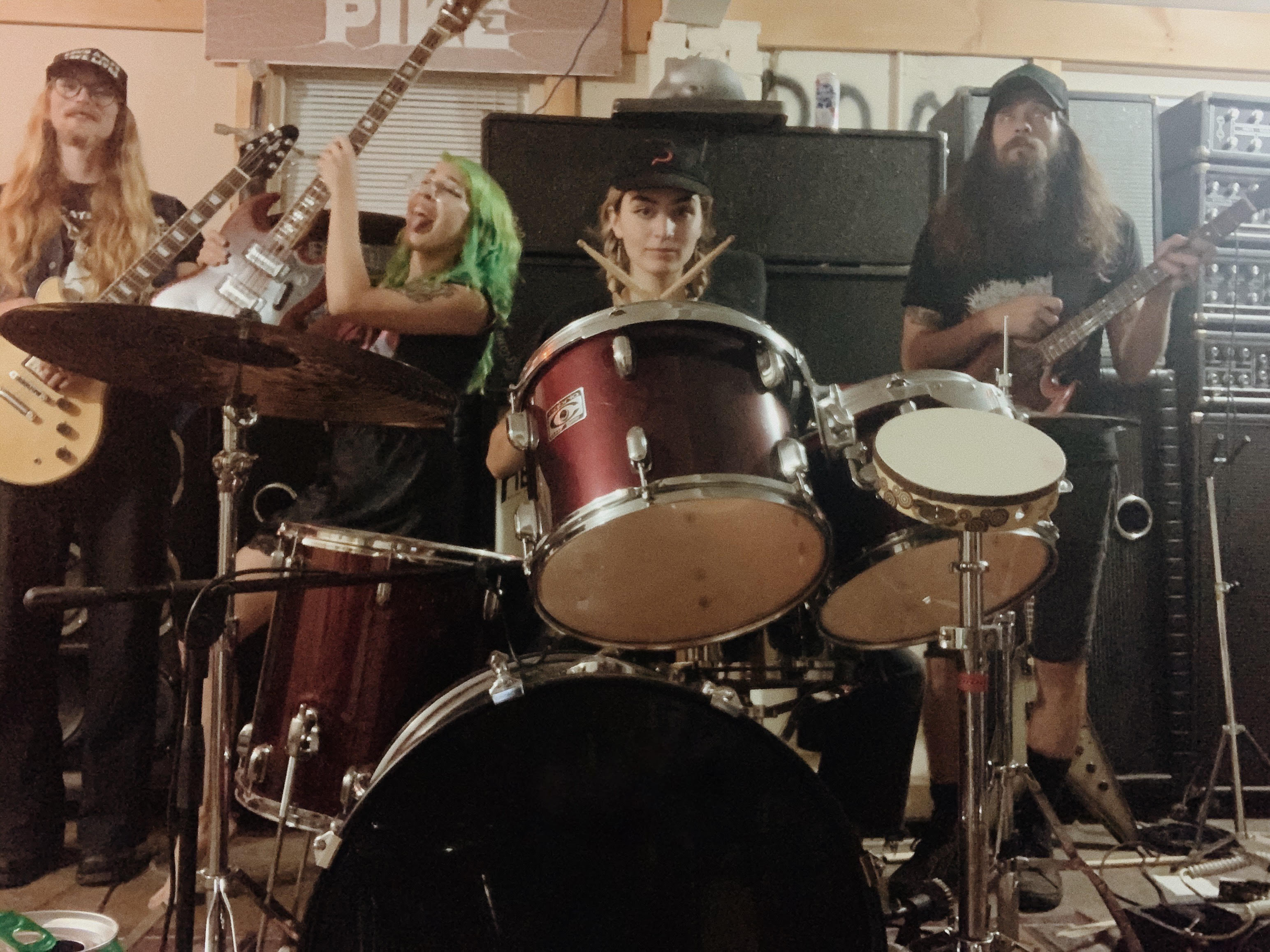 Toadsmoke is a band created by Chattanooga locals Ray Kronenberg, Annie Haun, Elisabeth Sterchi, and David Sterchi. Performing at venues like JJ’s Bohemia, Sluggo's, The Spot Coffee Shop, Ziggy's, and The Submarine. These guys have performed at nearly all of the familiar music haunts in town. Regardless of the location, one thing is always consistent, they are loud and ready to show out with their skills in their thrash doom metal band Toadsmoke.

How did you guys come together?

We have all been friends for a long time. Ray and David were previously in a metal band called Powers together and David and Liz were in a band called Pinecone. Ray bought Annie a bass and they started playing music together on their own. Powers broke up and Ray wanted to start up another band, so he asked David if he would be down to drum in a doom metal band called Dare with him again. David said yes, Liz was down to play guitar, and we had our first show about a month later. Originally Annie played bass, Ray played lead guitar, Liz played rhythm guitar, and David played drums. We have had some instrument switch-ups and since changed our name to Toadsmoke. Ray is still playing lead guitar, Annie is on bass, and Liz and David switch between guitar and drums, and we all sing.

When did each of your relationships with music begin?

Ray: I played viola for 6 years in middle and high school. I didn’t play at all after high school until I was at a friend’s house in Memphis one night partying and they got me to mess around on their bass. They couldn’t afford to pay their power bill, so it was unplugged by candlelight. I went to a pawn shop shortly after that night and bought my own.

Liz: David and I grew up with our dad playing blues music all around Chattanooga in Sterchi Brother’s Blues Band - so we both grew up around music our whole childhoods. I played violin in the orchestra for 7 years and taught myself guitar on the side. I started playing violin and synth with Pinecone when I was around 17 and somewhere along the way picked up bass as well.

David: Similar story to Liz - we both grew up around music going to Dad’s shows and band practices every Sunday. I took piano lessons in kindergarten, got my first guitar when I was 5, played saxophone in middle school, and started playing bass and guitar around the same time. In high school I started playing with a few bands and after high school started Pinecone with Liz.

Annie: When I was super young my mom would take me to bars around town to watch my Dad play guitar in his band. I have photos of me as a3  year old holding my first guitar. My Dad taught me the basic chords as a kid and gave me his old Martin acoustic when I was a teenager. I played synth briefly in a band in high school and then Ray bought me my first bass maybe 5 or 6 years ago. We started to Dare in 2018.

We are inspired by the things that affect humans the most in life. Death, extreme emotions, life, mental illness, addiction, controversial subjects that everybody else is afraid to talk about.

How would you all describe yourself as a band?

Annie: “I would say we are a 70s inspired thrashy doom metal band”

What’s the best advice you’ve received as a musician?

Ray “The hardest part about practicing is taking it out of the case,” from Gary Wilkes, my orchestra teacher.

What advice would you give to other musicians?

How do you feel about the Chattanooga Music scene?

There actually aren’t many other bands around here that play the same type of music that we do (thrash/doom/stoner metal,) but we have been included on a lot of bills with all sorts of genres - punk, noise, rap, etc. and have almost always had a great time. We are also super thankful we have people like Donald Posey booking bigger name shows at Ziggys and including us on the bill, John Shoemaker at JJ’s always being down to put us on a show and making sure we get paid, Terry and Ashley at Sluggo's having the best venue in town and Allen Beltran bringing the sickest bands there to play, and of course all the insanely fun house parties we have played at. Of course, there are plenty of bad eggs in any city’s music scene, but we are stoked there are even more good ones here.

How can we support you and other musicians at this time?

Everybody stay home and wear masks when you have to go out so we can all play live shows again soon.

What do you feel can be done to stimulate the local music scene at this time?

Same answer, really. Beyond staying home, the pandemic has been a good opportunity for bands to write, practice, and record as much as possible. We have been recording on our own, but it would be nice for there to be more help locally with getting bands recorded professionally.